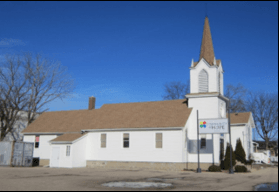 The Smyrna Church was originally the Immanuel Evangelical Lutheran Church. It was moved on logs with teams of horses in 1876 from its Fisher Road (now Greenbrook Boulevard) location, near the present site of Grace Presbyterian Church. The congregation felt the move was necessary because the center of popula­tion had moved to the Ontarioville area. A steeple was erected in 1895 and at that time the church was moved close to the street to line up with the parsonage. (History in the Making by Michael Johnson, 1990)

This small country church which possesses its original Gothic Revival qualities was built in c 1870 elsewhere, and moved to this site in 1874. A small graveyard, whose earliest tomb marker appears to be 1903, lies to the south of the church.

The steeple, pointed arch windows, simple country church imagery all add to the architectural significance. The church is the single most important visual element of Ontarioville’s architecture. 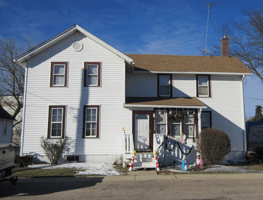 A basic upright and wing house built in c 1870 and altered by aluminum siding and a porch enclosure and perhaps the removal of Greek Revival details.

Simplicity of upright and wing form contribute to the architectural significance.

The parsonage is also sided in aluminum, nonetheless, its L-shape, gable roof and double-hung windows made it a good fit with the other small scale structures in Ontarioville. It was moved with the church from its former location on Fisher Road (now Greenbrook Boulevard). The parsonage has been home to the church's pastors for nearly 125 years. (From History in the Making by Michael Johnson) 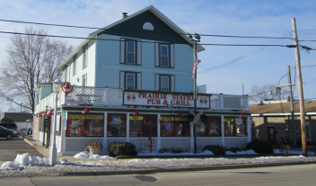 The former two story Italianate Drover Hotel c 1880, is raised on a masonry base with distracts from its integrity.

The history of this two-story Italianate building dates back to the 1850's. From then until 1873, the structure was a stage coach stop. It was very possibly the Drover Hotel. A turning point came in 1894 when the property was sold to William Kruse, who had a dairy business. It is very likely that the building was raised on a stone foundation to keep the milk cool when the structure was first used as a dairy. It has been a tavern for many years. (History in the Making by Michael Johnson, 1990) 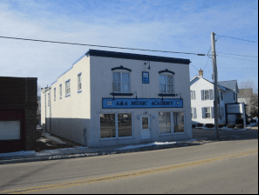 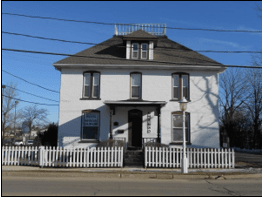 This is a simple prairie square, or cubic structure built in c 1900. It was formerly a dairy cooperative executive residence. It has good architectural integrity, but was inappropriately attached to the adjacent dairy freight building by a later concrete block structure.

The architectural significance comes from the original character being still intact and being the only brick house in the district.

Located adjacent to the Dairy Co-op, the Executive House is a two-story structure capped by a hipped roof. With tall double-hung windows, a central dormer and a front porch with turned posts. It is the first historic residence constructed of brick in Ontarioville. Its simplicity, symmetry and broad overhanging eaves place this house in the tradition of "Four-Square" houses with Prairie School influences. It was constructed to house the family of the executive of the Dairy Co-op, the single-story triangular-shaped building located immediately to the west of the Executive House. (History in the Making by Michael Johnson, 1990) 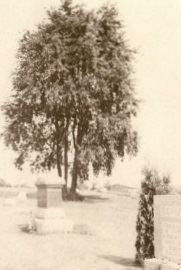 The cemetery, located at the original Smyrna Church site on Greenbrook Boulevard (next to the Grace Presbyterian Church), is the oldest cemetery in Ontarioville. It is the final resting place of many of the area's original settlers. 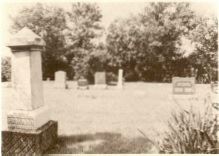 The cemetery, adjacent to the present Smyrna Church site, was created when the church was moved to its present location in 1876. The first burial to take place there was in 1903.